I adore your sense of humor and spunk, but there is a time and a place to be serious and sincere as well. Today was one of those times.

“I will not teach liars and thieves! Get out!” the voice reverberated down the hallway to my classroom.

Mr. Bain’s door opened and closed rather loudly, and I was concerned. It was my planning period, so I walked into the hallway and noticed you standing outside of his room. Your upper lip, left cheek and uniform shirt were covered in a white powder.

“Did Mr. Bain ask you to leave the classroom?”

“Why did he ask you to leave?”

You smiled, shuffled your feet and looked down at your shoelaces. A moment later, Mr. Bain opened his classroom door and dropped your binder on the floor. “He cannot come back into my classroom for at least a week!”

You shuffled your feet again.

“Terrance, did you take something from Mr. Bain?”

I walked across the hall and picked up your binder.

“Yeah – uh – I mean, yes. I did. I – ” you giggled slightly and looked up at me with that twinkle in your eyes, “I knewd he had a pack of those donuts he always eatin’. Those white, powdery donuts in that little package. He had one of those in the top drawer in his desk, so I just took ‘em.”

We sat down on the floor in my classroom.

“You just took them?”

“Well… I mean, I ate them. I had to ate them real fast because I was scared he was gonna turn around and catch me behind his desk, so I kinda got that powdery stuff everywhere.”

Handing you a paper towel to clean your face and shirt, I said, “ Terrance, you and I both know that it’s wrong to take food that doesn’t belong to you. Are you hungry? Did you eat breakfast this morning?”

“Naw Miss, I ate breakfast,” I just (giggle, giggle, giggle), “I just wanted to see his face when he knewd his snack was gone!”

I had you stay in my room for the remainder of that class period to learn a lesson about trustworthiness by picking up trash off the floor and cleaning out the student desks.

Just when I thought we were clear about the difference between times to be funny and occasions to be sincere, your classmates filed in my room for English Language Arts. I noticed that you stayed on task and finished your work before class ended, so I gave you the early-finisher activity: Write a card to a family member or teacher for Thanksgiving. 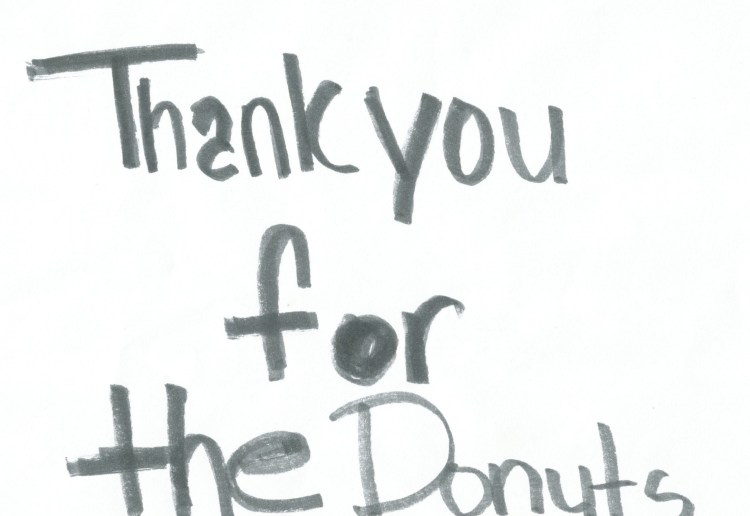 While admittedly hilarious, this is not a heartfelt apology. For homework tonight, you will write a straightforward and sincere apology to Mr. Bain. Save the jokes for your standup routine, and save me a ticket. Let’s pass the sixth grade first, though, and then we can talk about your future plans for your comedy hour on television.

Leave a reply. All comments will be approved before posted publicly. Cancel reply